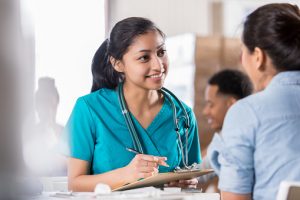 Representative Ro Khanna (D-CA) introduced a bill to Congress last month that would direct OSHA to issue rules to prevent workplace violence in healthcare facilities. The bill would bring to the nation a law that went into effect here in California last year.

Dubbed the Health Care Workplace Violence Prevention Act, the bill gives OSHA a deadline on an interim rule, a deadline on a final rule, and includes standards OSHA’s new rule will be expected to meet.

Safety + Health Magazine examined the bill and some of the context behind it. In a press release, Khanna explained that “health care workers, doctors and nurses are continuously at risk of workplace violence incidents – strangling, punching, kicking and other physical attacks – that can cause severe injury or death.” The bill calls upon OSHA to address this danger with a new definition for workplace violence that includes threats as well as physical assault and a call for larger numbers of available staff. The hope is that having more staff on hand will lower the chances of employees leaving sight of one another and will increase response times when incidents arise.

National Nurses United, the largest union of registered nurses in America, supports the bill and maintains its own record of the dangers healthcare workers face. Their data shows that nurses are three times more likely to suffer nonfatal injuries than the average across all industries. Workers at inpatient facilities are 5 to 12 times more likely to experience some form of nonfatal workplace violence.

Beyond this, there were at least 58 hospital employees killed by workplace violence between 2011 and 2016. These numbers are concerning on their own, but healthcare violence is also known to be under-reported. A full 88 percent of healthcare workers, according to an NNU study, stated that they do not report every act of violence they experience.

A Call to Action

The bill calls on OSHA to act in specific ways, and the full text also gives the administration a deadline on their action. Within one year of the bill’s passing, OSHA would be required to have an interim rule in place that will address safety concerns until a final rule can be adapted, no later than two years after the bill passes.

The final rule would not be limited to hospitals and other offices, but must include “comparable workplace protections at home health agencies or organizations and hospice agencies or organizations.” Weapons and substance abuse screening, identifying uncooperative individuals, and quick access to security personnel, police, or an equivalent are included in those protections.

Healthcare employees spend their days working to keep the public safe and healthy, and it is time our society returns that concern. Rep. Khanna is taking a great step toward ensuring that workers in this vulnerable field receive the protections they deserve, and we urge our lawmakers and OSHA to follow through on his bill.

We will continue to monitor the progress of this bill and, as always, we will fight for the rights of workers to enjoy a safe workplace. If you have suffered a workplace injury, contact us today to learn how we can help you get the justice you deserve.