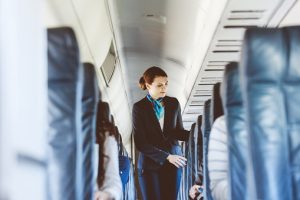 A recent study found credible evidence linking a higher risk of numerous cancers to work as a flight attendant.

Published recently in the journal Environmental Health, the analysis was conducted by medical experts from the Harvard T.H. Chan School of Public Health. Surveys were issued to nearly 5,400 flight attendants across the country, who were queried about their work experience, personal characteristics, and overall health. The researchers then compared the flight attendants' cancer rates to those of professionals working in other industries, as documented within the National Health and Nutrition Examination Survey.

The results were deeply troubling. Flight attendants were markedly more likely to have a cancer diagnosis of every single type of cancer that was examined. This included non-melanoma skin cancer, melanoma skin cancer, and breast cancer. Researchers found this link particularly strong considering that as a whole, flight attendants have lower rates of other conditions associated with cancer, such as smoking, diabetes and obesity.

So now the question is: What's causing this?

Some medical experts believe this elevated risk may have something to do with exposure to radiation - specifically cosmic ionic radiation. Flight attendants also routinely work odd hours, and therefore have frequent disruption of their sleep cycles, which is known to be associated with higher rates of cancer. Further, airplanes are known to be rife with numerous chemical contaminants, to which cabin crews may be directly and repeatedly exposed.

San Diego workers' compensation attorneys recognize that work injury cases like this may be difficult to determine, considering this research is relatively new and study authors have called for more. But this is true of almost every work-related illness which, unlike injury, often lacks a definitive date for cause of action.

Conditions like cancer, repetitive stress injuries and stress-induced heart attacks - these conditions are not easily proven to be work-related, but proof is not impossible. In fact, flight attendants themselves may have long wondered whether there was a connection given that so many of their co-workers seemed to be suffering from these ailments. This research provides additional ammunition in workers' compensation claims.